Factions in the Sandbox

My recent post on the Bakdunis family has me thinking again about tools a DM can use to run a successful sandbox campaign. Anyone who has run a campaign has faced the challenge of balancing between railroading the players into the game that has been prepared and giving them the agency to make the decisions they want. I think most railroading happens because the DM is unprepared to deal with the players' choices.

A central way to avoid having to force the players down a path (or force your path down the players' throats) is to have a rich setting. Having a bunch of different options and bounding your players with ample choices will keep you from having to force one choice on them. A resource like Vornheim, chock full of tricks, tables, and quick outs, is a great tool to have on hand.

One way that I'm making Kimatarthi a rich setting is by laying out a canvass of factions for the players to deal with. The Bakdunis are the ruling family that came to power through a coup. Perhaps it was warranted, but no one pulls that off without making enemies. The city they rule has also become a mixing bowl of refugees from all across the land, different classes of people, different backgrounds, different customs... different expectations. All this creates friction. 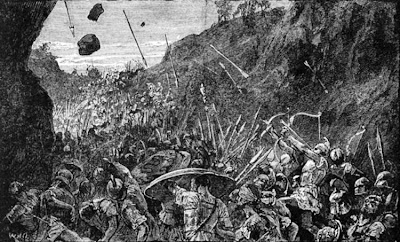 Markaz is not just the ruling family and their supporters. There are the old elite families that the Bakdunis deposed and the non-elites who suddenly found themselves in competition with the world's refugees. There are the elites that were deposed by rampaging goblins and reestablished themselves in Markaz. There are the descendents of refugees, some of whom did well, others not as well. There are new elites, charismatic populists, clergy, merchants, kings and queens of the black market, and time lords crime lords. The Markaz Guard are not the only military organization in town, a development that always makes things interesting. And, of course, there are the Mages.

The PCs will start off as conscripted grunts in the Markaz Guard, but it will soon be clear that they will have the opportunity for freelancing, moonlighting, and the pursuit of their own separate interests. If these interests happen to run contradictory to their current jobs, well, that just makes for good plot hooks. They're bound to make friends, allies, rivals, and enemies. So if they don't want to take the job that's being offered one week, that's fine. This decision will, no doubt, put them in some other interesting position.

So what's the advantage of having a plethora of factions, as opposed to other tools for building the sandbox? Simply, it's because of the relationships. By creating a scenario in which the characters build relationships it will self-generate plot hooks and constraining factors, thus removing the need for the DM to railroad them into a particular storyline. The players can build trust and affiliations. They can build animosity that creates its own challenges. Our group's Slaying Solomon campaign has this dynamic, which played out in a major way this past week (...as I have learned. I had a "kid" to "take care of" and couldn't "go play games this weekend."), and I think it's a great way to keep things rolling and make up some great stories along the way.

Posted by MadMadMad at 12:06 AM No comments:

The People of Anamere II

Well, Jenna's two for two in my Plugs for Peeps. Either the rest of us need to get crackin' or I need to meet more people who are actually publishing gaming materials.

This series is pretty cool in that it provides everything you need to run a game, except the rules. So it gives you all of the set-up, characters, twists, turns, and all you need to do is plug in your favorite gaming system. You could run this as Risus or Traveller just as easily.

So go out and buy Sci-Fi Sandbox 06: The People of Anamere II. It's got a cast, and encounters in space and on a beautiful tropical paradise. I haven't read it yet, but it is promising anthropologists and an alien race of Otterfolk.

You can download it from DriveThru RPG by clicking... here.
Posted by MadMadMad at 9:14 PM No comments:

Email ThisBlogThis!Share to TwitterShare to FacebookShare to Pinterest
Labels: Plugs for Peeps