Taking FATE for a Drive

Not long ago, I finally got to check two boxes on my RPG to do list: I ran a game in the City of Markaz, and I ran FATE Core. It was awesome!

As far as running the setting - I have to say that I was hugely excited and a little nervous. After all, this is a world that has been living and evolving in my head for many years. The time has just never been right to run it. Pre-game jitters had me worrying about every sort of disaster, but in the end, everyone had a great time, and I feel like this creation of mine got the breath of life.

1) I made it a point to try out as many different mechanics as possible. I planned a few different combat scenes to cover multiple unnamed NPCs, a single strong NPC, and a mix of named and unnamed NPCs. I worked in a couple challenges and a contest, too.

2) The players, as I had hoped, brought new dimensions to the setting. These are, after all, the most robust characters living there. It was really cool for me to see the different angles that they each brought to the world. That was the highlight for me.

What I muffed up:

1) I didn't really get the FATE point economy flowing. Yeah, this is a huge oversight, but I was so occupied with making sure all the mechanics were straight and spending the NPC's FATE points, that I only made a few compels throughout the game. The players didn't offer any either (only one of us had ever played FATE before), but in the end it falls to the GM to make that work.

2) As this was the first time playing the game, it was hard to size up my players for the challenges they faced. In two scenes, I realized that what I had planned was completely beyond their level, so I had to reign it in. Then, in the last scene, I pulled it in too much, and they decimated the baddies at the climax. Meh. It all worked in the end, but I felt like a student driver pounding on the gas and the brake.

3) This next thing I chalk up to Murphy's Law: Not only do I have reams of notes about NPCs and interesting places and factions for the players to interact with, but I have all kinds of pictures that I always planned to whip out in session. Unfortunately, the day I ran this game I also sat in Virginia traffic for six hours. I didn't mean to do that, and it kinda messed me up. In the ensuing chaos so I dashed out the door with only my game notes. All my background stuff stayed behind.

All you can do is laugh. In the heat of the game, I totally forgot the name of one of my major NPCs... so on the fly I named him after my Freshman year philosophy professor. But that's the beauty of gaming, right? Here he is: Master Kerlin.


And here are a few other pictures, (besides those at the Markaz page) that I could have thrown out there.

This article leads to this site, which has some pretty awesome maps.

Clearly, there is plenty to explore here, but the pic Slate republished is the one that caught my eye. It reflects travel times in the United States at various points in history – one week from New York City to North Carolina in 1800, for example – and numerous routes of travel. I really dig the panel on navigable rivers.

A quick look shows David Rumsey has a lot of potential for inspiration and game use. Here's another awesome illustration of the Black Hills. 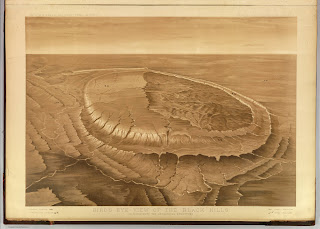 Posted by MadMadMad at 9:23 PM No comments: