Here are some more ideas for neighborhoods that I will use to flesh out the city of Markaz. These, along with the others, will provide a few areas to play around with in the beginning, with more to be added as needed. 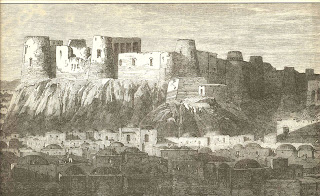 Bakdunis Market
The biggest market in Markaz is (conveniently) named for the family that currently governs the city. The market is an enormous plaza paved with stones and crisscrossed by a network of market stands, and it sits at the foot of the cliffs, overlooked by the Citadel. Some parts of the market are more permanent structures of stone, wood, or mud, while others are clearly of the temporary canvas variety. At its heart is a huge fountain that is fed by one of the several springs that supplies Markaz. The fountain fills a cistern that spills into an aqueduct that flows down from the market to other neighborhoods. Every demographic in the city can be found here, as can anything that can be bought or sold - it's only a matter of price.


Gullytown
Gullytown is a slum that sits in a ravine between two wealthy, hilltop neighborhoods. An open sewer runs down the middle, fed by runoff and waste water from about half of the city. A large stone bridge flies high over the shanty, allowing more civilized folk to move between rich areas of town without having to mix with the poor. Many houses here seem to be little more than temporary shelters and they are piled nearly one on top of another. Walking from one end of Gullytown to another will often take you straight through someone's home. During the heavy rains that happen every year or two, the sewer is likely to overflow, killing lots of people. But usually, the high walls of the valley provide shelter from the sun and brutal heat of Kimatarthi.

Garden City
Home to many of the old merchants and elite families of Markaz, Garden City has been able to tap into the aquifers below the hill to provide water for old trees that line beautiful winding boulevards. Large estates and private homes are hidden behind high walls, and lush gardens and terraces provide the public shelter from the brutal heat of the day - unless you're not the right kind of public. It is one of the nice neighborhoods that hovers above Gullytown.


Landfill
For centuries, Markaz has dumped its garbage at the base of the cliff just west of the Citadel. This area is now a sizable hill where many of the city's poor make a living sorting out reusable scraps from other refuse. Many of the residents live in ramshackle homes built on the rubble. Some of the older, more established families (who constitute an "elite" of their own) live in homes that are built into the hillside itself - though no one is quite sure if these were carved into the earth, or if the original structures were swallowed up by decades upon decades of rubbish.
Posted by MadMadMad at 4:48 PM