More than likely, the campaign will center on the city of Markaz, the bustling urban heart of Kimatarthi. Centuries ago, the city burgeoned into an important trading hub, since it straddles a gap in Great Rift. As the easiest intersection between the east and west, Markaz served as the departure and arrival point for caravans making the long trek between Bryss and the cities and towns of the east. This central location turned it into a wealthy and populous metropolis where anything and everything was available for the right price. 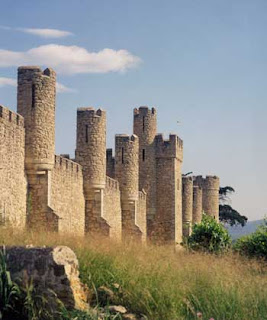 The city’s position makes it naturally defensible, but over the years, the gap was further fortified – in order to dominate the trade routes as much as to defend the city. The road up from the eastern lowlands climbs from the Black River to the city walls. To the north, the old fortress of Markaz sits atop looming cliffs, looking down over the busy markets of the valley. The city sprawls south, rising into wealthier neighborhoods before descending once again into poor, dilapidated slums and the Empty Quarters.

Markaz was the stronghold that withstood the goblin onslaught. As the invading horde rolled across the land, the survivors poured north, seeking shelter beyond the gap. Refugees arrived by the thousands. Though the goblins did briefly breach the city walls, human kind rallied and drove them back. Today, many years after that fateful battle, Markaz remains a melting pot of all the families, tribes, and peoples of old Kimatarthi.

Although the general population of the city is a motley mix of humanity, the old elite of Markaz still runs the show. The city is governed by the Bakdunis family, who dominate the politics, trade, and many other aspects of life in Markaz. Obviously, not everyone is happy with the current arrangement, yet the Bakdunis are able to maintain control with through savvy politics, dirty tricks, and occasional brute force.

Also, I recently picked up the Vornheim kit by Zak S. and I really dig a lot of his ideas. His book offers a ton of tricks and tables and whatnot that I’ll probably use to facilitate adventures in Markaz. While my city has a totally different feel—it’s much more ‘brown mud walls’ than ‘towering grey stone,’ among other things—his approach is universally applicable and everything is easily tweaked. It also offers plenty of material to riff off of. I’m looking forward to taking it for a drive someday.