Land’s End is just that – the end of the world. North, south, east, or west – whichever direction you travel, sooner or later you will reach Land’s End. Not many people in Kimartarthi have seen it, as there are few places near civilization where it is visible. And it’s not a destination, since, well, it’s the end of the world and there ain't much there. 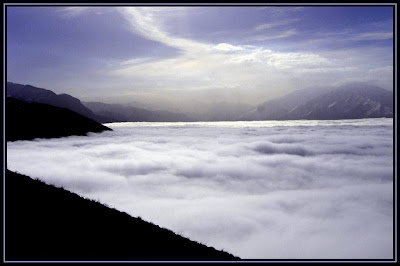 Those who have seen it, though, say it is a strange and marvelous thing. The land simply ends and drops off into a sea of mist that stretches out beyond the horizon. There are strange tales about Land's End, too. Some tell stories of men who have strayed too close to the mist only to be seized by wraiths, pulled their deaths, and never heard of again.

What terrible fate beyond the grave could await the poor soul who perishes beyond the borders of the world? Only those risking a TPK may ever find out!
Posted by MadMadMad at 11:40 PM