Real life is still a bit hectic with a new addition to the family. I've only just made it back to the gaming table after hiatus of two and a half months. (There's a good write-up of our session here.) Hopefully, I'll get in more game time and more blog time. I've been asked to do some more posts that describe my world of Kimatarthi and lay off the mechanics for a bit. ...ok, so it was my lovely (but non-gaming) wife who made the request, but I thought it a wise suggestion anyhow. Hey - I have at least one regular reader!

Like most cities, Mudun was destroyed in the Goblin War. Anyone who didn’t flee met an unspeakably brutal end. The city was sacked, and only a vacant, crumbling shell was left. It remained like that for several decades until an exodus known as the Great Rebuilding. The overcrowding, disease, and poor quality of life in Markaz eventually began to create agitation and instability in the city. Desperate, the rulers organized a military campaign to retake Mudun and reestablish a human presence east of the Lowlands. It was the last great Bakdunis campaign against the goblins. After clearing the city and the surrounding area, thousands of civilians were sent to reestablish Mudun.

The original city sat on either side of a river, but the goblin threat is still very real and Mudun is a frontier town. To bolster the defenses, the rebuilt Mudun exists only to the  north of the river, and all but one bridge connecting the banks were destroyed. On the south side of the river is the scarred and crumbling ruins of the old civilization… and the vast majority of the region’s wealth. 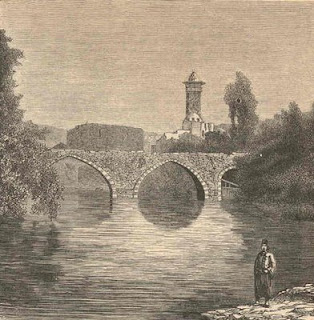 Mudun was chosen as the first city to rebuild because of its proximity to arable land, pastures, and mineral resources. Yet the sheer number of goblins continues to make access to these resources perilous. Each day just before dawn the Bridge Gate is opened, and people flood across to do their work in goblin territory. Each evening at dusk the gate is locked again. It makes work life difficult, but it is the only way to preserve the city from the ever-present goblin danger, as those unfortunate souls who are occasionally stranded on the wrong side of the river would attest if only they could be found.
Posted by MadMadMad at 10:43 PM