One thing that has fascinated me about every city I've ever visited is the proximity of diversity. In old cities and in cities that have seen rapid change, the style, look, and feel of each block can be different. Often, the difference is as varied as the number of buildings.

But it's not just cosmetic differences. In a huge city, within just a few blocks you can have completely different communities, different people, different social norms. Cities always have areas that are "off-limits" to certain groups and the difference of a few meters can be the difference between strangers and family. Cities are inherently high-context environments, and as such, they offer enormous opportunity for gaming scenarios.

I see my main city of Markaz as a scratchpad for all the amazing, awful, wonderful, horrible things that have fascinated me about cities. Here are some concepts for a few key areas in Markaz. I think these can serve as interesting locales for the PCs--at least initially--and others can be made up as needed.


Citadel
The northernmost part of Markaz is the original settlement, which eventually grew into a fortress. It remains a walled town that overlooks the rest of the city. Citadel is home to the Palace, the townhouses and walled estates of the city's elite, and a number of fancy shopping and dining districts. Thought the original city walls and gates still stand, they are mainly used by the elites to make sure that no one too unsuitable is able to wander freely up the hill.

The Empty Quarters
Long ago, when the goblins laid siege to Markaz, they breached a portion the southernmost walls and laid waste to some parts of the city. Since that time, those areas have been taboo and even the poorest of the city are loathe to live there. That does not mean the area is devoid of activity, though. A great deal of nefarious activity takes place in the Empty Quarters, and goblins still live like vermin in burrows between the abandoned buildings. It has become a lawless area, convenient for those who want to avoid attention. 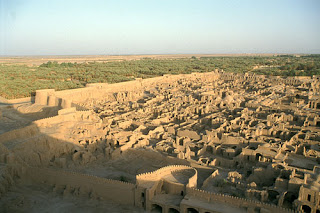 Barracks
This neighborhood is positioned between the city's Eastern Gate and the hill that leads up to the Citadel. Not surprisingly, Barracks gets its name because the City Guard barracks are here. With so many young soldiers running around, it should also come as no surprise that many of the cities finest boozing, gambling, and whoring establishments are also here.